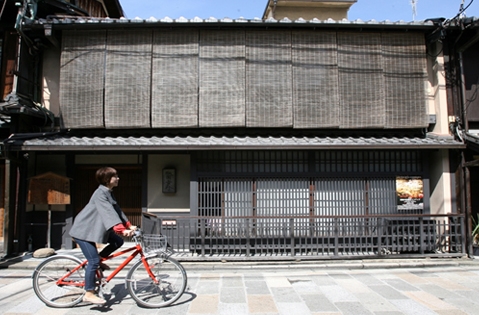 Hop on a bicycle for a cycling excursion through the ancient city Kyoto. Take the back streets, the alleys and the stone paths to discover new sights of Japan and new things about Kyoto which cannot be seen on a bus or walking tour. The Kyoto guided cycling tour takes you back in time, where you can imagine being part of the history of Japan.

Gion
Gion is the most famous and exclusive geisha district in all of Japan. Lined with traditional townhouses, the atmosphere of Gion will make you think you’ve stepped back in time.

Shirakawa River
Cruise the street lined with willow trees and cherry trees along Shirakawa River which runs through the Gion area. This area provides a feeling of traditional Kyoto.

Heian Jingu Shrine
Heian Jingu Shrine was built in 1895 as a partial replica of the Heian Palace (former Imperial Palace) on the 1,100th anniversary of the establishment of Kyoto as the capital of Japan.