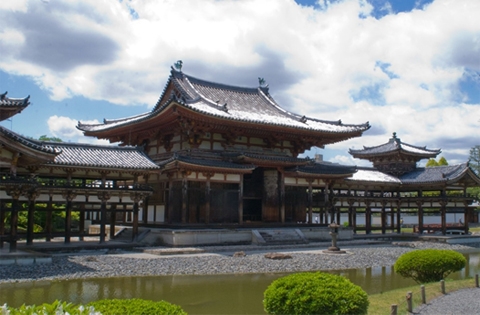 Visit the picturesque area around Ujibashi Bridge and the intricately designed Byodoin Temple and relax with a simple tea ceremony. Uji is famous for its green tea, known as “Uji-cha”.
After lunch, visit Todaiji Temple and see Japan’s largest statue of Buddha in the world’s largest wooden structure. Walk through Nara Park with the deer, and admire the 3,000 stone and bronze lanterns at Kasuga Taisha Shrine, the most celebrated shrine in Nara.

Ujibashi Bridge
Ujibashi Bridge spans the Uji River and its initial construction was in 646. It has been rebuilt numerous times and has appeared in countless poems, novels and paintings.

Byodoin Temple (50 min)
Byodoin Temple was initially built in 998. The most famous building in the temple is the striking Phoenix Hall, constructed in 1053. This hall is featured on the back of the Japanese ten yen coin.

Todaiji Temple & Nara Park (60 min)
Todaiji Temple was constructed in 752 on the order of Emperor Shomu. It is the largest wooden structure in the world and houses a 15 metre tall, immense, bronze statue of Buddha. The adjacent Nara Park is home to about 1,200 tame deer who roam the extensive parklands.

Nara Nagomikan (20 min)
This gift shop is where you can find something special for souvenirs such as locally brewed sake, foods, traditional crafts or authentic Japanese handcrafts.