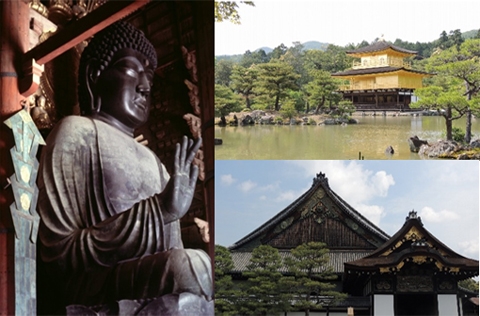 The Kyoto and Nara 1 day tour allows you to discover the must-see sights in Japan’s two ancient capital cities, Kyoto and Nara. In the morning, see the rich history of samurai and Emperors at Nijo Castle and Kyoto Imperial Palace. The incredible, pure gold leaf covered Golden Pavilion will take your breath away. Visit Todaiji Temple and see Japan’s largest statue of Buddha housed in the world’s largest wooden structure. Walk with the deer of Nara Park and then admire the 3,000 stone and bronze lanterns at Kasuga Taisha Shrine, the most celebrated shrine in Nara.


Nijo Castle (50 min)
Nijo Castle was built in 1603 as the residence of Tokugawa Ieyasu, the first shogun of the Edo period. This is one of the best examples of castle architecture of Japan’s feudal era.

Kinkakuji Temple (Golden Pavilion) (45 min)
Kinkakuji Temple, officially named Rokuonji Temple, is one of the most famous temples in the world, and is a symbol of Kyoto. Its top two stories are completely covered in pure gold leaf.

Todaiji Temple & Nara Park (60 min)
Todaiji Temple was constructed in 752 on the order of Emperor Shomu. It is the largest wooden structure in the world and houses a 15 metre tall, immense, bronze statue of Buddha. The adjacent Nara Park is home to about 1,200 tame deer who roam the extensive parklands.

Nara Nagomikan (20 min)
In this gift shop you can find something special for souvenirs such as locally brewed sake, foods, traditional crafts and authentic Japanese handcrafts.